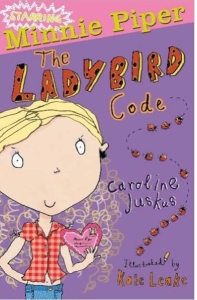 IF YOU LIKE PARTIES, SECRETS, RIDDLES, AND LADYBIRDS THIS COULD BE THE BOOK FOR YOU.  CONTAINS REAL MORSE CODE PUZZLES TO SOLVE. 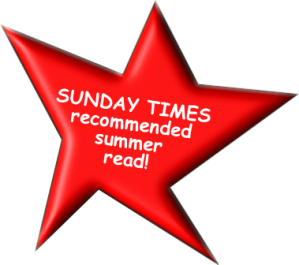 Minnie is planning her best birthday ever when a string of riddles sets her off on a birthday treasure hunt.

YOU CAN READ THE FIRST CHAPTER HERE… 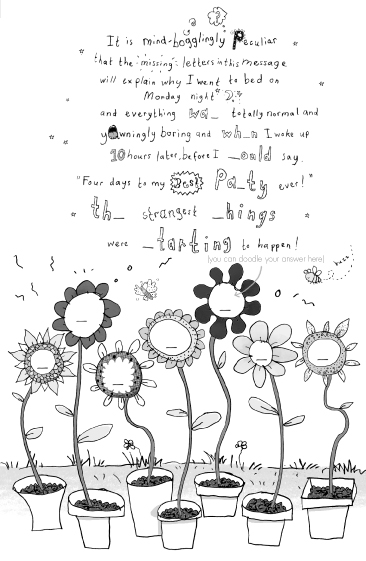 This is my puzzling party invite!

I handed it out yesterday and all my friends are secretly excited but… I’m not the only one sending out puzzles because this has just arrived in the post!

It is handmade and someone has cut out two pink hearts and glued them together about the edges to make an envelope. And it is totally peculiar because I never get post, except on my my birthday (which is next Monday). But I’m not supposed to save it till then because this is what it says on the back… OPEN TUESDAY!
And very excitingly today is Tuesday! I tear at the envelope and I cannot believe it, but inside is a sheet of tissue and this is what it says: 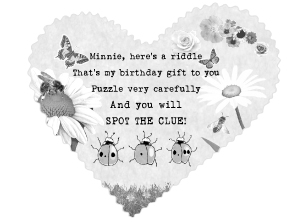 “What does that mean?” I gasp, showing it to Dad.

“Perhaps it’s a secret love letter!” he laughs.  “It is heart-shaped after all.”
“And you have to work out who it’s from,” giggles Mum.  “I never knew you had an admirer!”
And I immediately blush because I have never had a love letter before, but before I can take another peep Dad looks at his watch and panics, “You only have three minutes to catch the school bus, Minnie!”
And this is no-time-for-reading annoying, and I have to stuff the riddle into my pocket and leg it to the corner of Arthurs Way. I get there three seconds before the bus, but this is perfect because Trevor and Tiffany are waiting too and more than three seconds with the Terrible Ts is definitely too much! 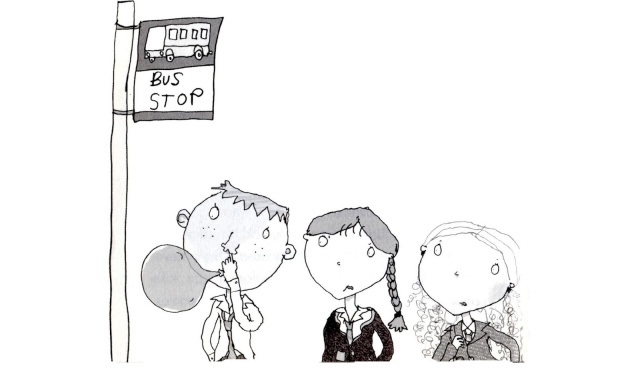 I’ve been desperate to catch the bus for weeks because then I can go to school with Frankie, and now Mum has had to agree as, after zillions of hints, she’s finally making me a new bedroom. She’s got a week off work and wants to decorate it ASAP so it’s out of the way before my birthday. Then she can concentrate on my top-secret party. And all this means she’s HUMUNGOUSLY busy and has no time for morning walks!
Frankie is saving me a seat and it’s my turn to sit by the window because it was her turn yesterday. It’s the best seat because you can huff on the window and write secret messages that disappear until you huff on them again. But right now I have my own secret message burning a hole in my coat pocket, and I’m about to tell Frankie when…
“Are you going to give me another party clue?” she grins.
“Maybe,” I tell her. “But first I need to show you…”
“I can’t wait to see it.  Is it purple again?”
“Of course, it’s my favourite colour.” And to keep her happy I sneakily pass her…

“Fabiozo!” she giggles.  “It’s going to be the best party ever.

“I know,” I tell her, “and you’ll never believe it but…” and I have nearly told her I am getting a DJ when Tiffany Me-Me sits right behind us. This is trying-to-scratch-your-back annoying as I do not want Tiff to overhear. My riddle and party are both secret and me and Frankie have been thinking party thoughts for two weeks and Frankie’s very first thought was DO NOT INVITE TREVOR OR TIFFANY! She’s even made me a best-party list… 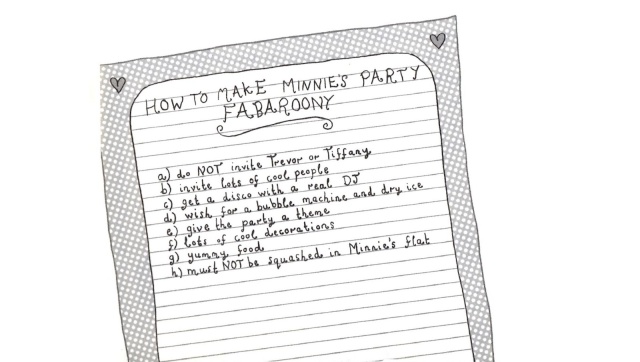 Frankie says the first point is extra important because Trevor would pick his nose (and the crisps) and Tiffany would be in charge of everything and it would be especially awful instead of specially brilliant. But this means I have to be mind-bogglingly clever if I am ever going to get to Saturday without them finding out. So I huff on the window and doodle DJ.
Tiffany sees it and says, “Do you love Daniel Jackman, Minnie?”
“NO!” I tell her.
“Then why have you written his initials on the window?”
“I haven’t,” I sigh.
“Have!” says Tiff. And she totters off to tell the entire bus I love the drippiest boy on the whole of the planet.
Frankie knows I do NOT love Daniel Jackman but whispers, “Kevin Little will be jealous, Minnie. You know he’s got a crush on you!”
And my cheeks go hot because secretly I quite like Kevin. But I am suddenly panicking, what if my riddle IS a love letter… and it’s actually from him?!
I decide I must tell Frankie about my riddle NOW! And I have just whispered, “Frankie, guess what?” when… GUESS WHAT? The driver tells Trevor to sit down and, as Tiffany’s busy spreading rumours, he lollops behind me in her empty seat.
He has a missed-his-mouth cornflake stuck to his chin that wiggles as he grunts, “What you up to, Piper?”
I cross my fingers and say, “Actually, I am thinking it might be nice to have sprouts for breakfast.”
He glares at me as if I am mad and says, “You’re mental, Piper. Nobody ‘as sprouts for breakfast.”

“My dad does,” I tell him, fingers still crossed, “He has Brussles sprouts on marmalade on toast.”

And the thought of eating something green is enough to turn Trevor’s stomach and he disappears to the back seats to squeeze in with Abhi and Jasen.

“Yuck!” cringes Frankie.
“What?” I sigh.  “Sprouts or Trevor?”
“Trevor,” giggles Frankie. “And does DJ mean you’re getting a DJ, Minnie?”

“Plus dry ice and a bubble machine!”

“Fabaroony!”
“I know! My first real party ever!”
“Let’s count how many hours till it happens.”
“OK,” I grin and we do our sums and mathematically-brilliantly it is only 106 hours and 5 minutes!

But my bus trip is annoyingly much shorter and we have got to school before I can tell Frankie about my riddle. 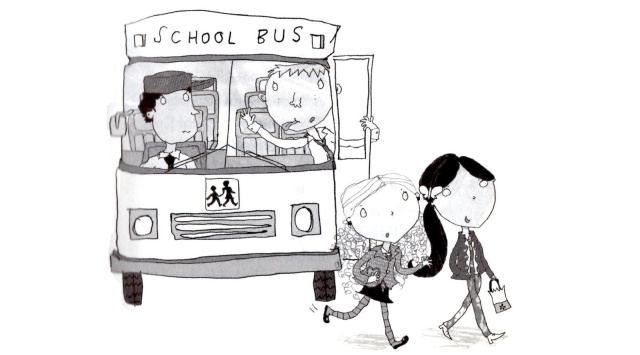